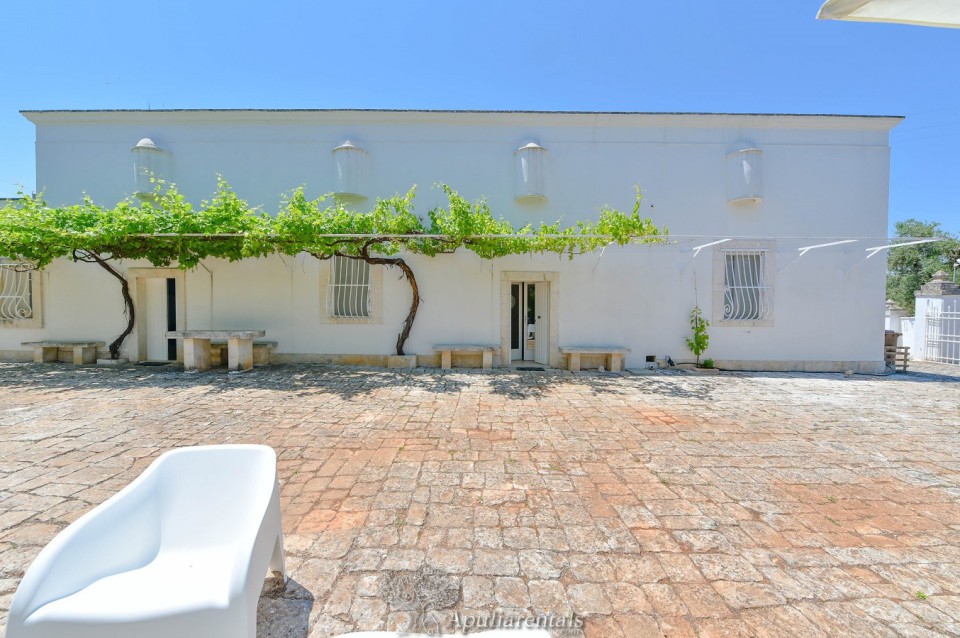 Masseria Profilo for Rent with Swimming Pool is located on a hill immersed in the countryside of Monopoli in a district called Cozzana, famous for the presence of ancient and majestic villas. Equipped with a swimming pool and consisting of 2 residential units, Masseria Profilo has 7 bedrooms and 6 bathrooms and can accommodate up to a maximum of 12 people (possibly 14 with additional beds).

Ancient rural house, this typical farm is entirely built in light stone and immersed in a centuries-old olive grove. The farm is made up of 2 distinct units. The first unit is the original rural residence from the 1700s, featuring a spacious fully equipped kitchen and an equally large dining room, where a stone fireplace stands like a typical trullo of the country. There is a double bedroom with private bathroom, 2 single bedrooms both with their own bathroom, and a further bedroom with 2 single beds on the upper floor, also equipped with a bathroom. The sofa near the fireplace (sitting area near the dining room) can be considered as an additional bed, and there is also an extra single bed in the double room. These two additional beds could possibly allow to accommodate two more children.

The second unit has a very spacious bedroom, which can also be easily used as a comfortable living room, with two single beds and with ancient mangers recovered from the farm that recall the charm of rural traditions. Then, a spacious double bedroom with its bathroom and kitchenette follows and, climbing a staircase, a last small and characteristic double bedroom with a bathroom and a kitchenette inside a tower, where once there was the electrical control unit. Each room is equipped with an internal intercom, so it is possible to communicate from one room to another in the farm. In the warmer months, the large thickness of the walls allows you to keep the interior cool, without the need for air conditioners. Outside, the traditional bread oven and the all-stone barbecue embellish the summer evenings with a local color. There is a large square with a table and umbrella available for guests. All around there is a luxuriant vegetation and an expanse of almond olive trees between which extends an avenue that leads to the swimming pool, about 200m away. The farm is equipped with wifi connection, and on request also a cot for babies.

The fortified Masseria is located within the large park of Villa Profilo. A 300-meter-long avenue separates the two houses, both with independent entrances, guaranteeing total privacy for the guests of the farm. Along the avenue, surrounded by greenery, there is a spacious swimming pool surrounded by tall trees and Mediterranean scrub (located 50 meters from Villa Profilo).

In this masseria, located in the landscaped park of olive groves, almond trees, holm oaks, cedars of Lebanon and palm trees, where you can cool off around a large swimming pool, it is now possible to enjoy a healthy holiday with the microclimate of the hilly countryside near the beautiful city of Monopoli, where you can admire the Martinelli-Meo-Evoli palace (of the same family origin as the Masseria Profilo which in the eighteenth century was owned by the Martinelli family like the whole area of ​​Cozzana and a part of the surroundings of Monopoli) on the ancient walls surrounding, near the old port, the nearby tourist places (Alberobello, Castellana Grotte, Cisternino, Conversano, Locorotondo, the excavations and the archaeological museum of Egnazia, the wildlife park of Fasano, and then other cities such as Ostuni and Polignano a Mare. ..) and the beautiful beaches of the Adriatic Sea..