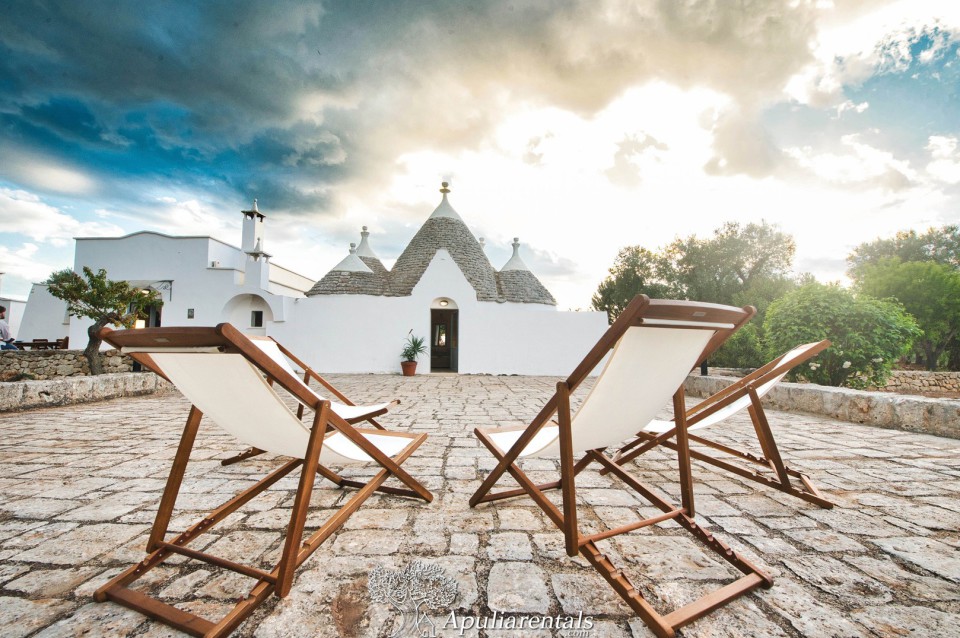 Trullo Paleo for Rent for Holidays in Puglia, is a wonderful example of unique rural architecture. This ancient structure has been wisely recovered and restored over the years respecting the typical canons of the Apulian tradition.
For all those who love nature, Trullo Paleo welcomes its visitors with expanses of centuries-old olive trees surrounded by the color of the red earth typical of this area.
The entrance of Trullo Paleo opens to the view of large vaults and stone arches of the central trullo, used as a living room / double bedroom with bathroom. Then, you reach the independent double bedroom and through a short stone corridor there is a further alcove with a double bed and a bathroom with shower separated from the rest of the rooms by a typical linen curtain. Finally, the living room of Trullo Paleo is characterized by a play of light and bright colors: large dining room with TV corner, kitchen equipped with oven and dishwasher, access to the outdoor patio.
Trullo Paleo can accommodate up to a maximum of 6 people and is equipped with INTERNET WI FI, ALARM SYSTEM, LAUNDRY CORNER, INTERNAL PARKING.
A short distance from the well-known destinations of Ostuni (8km), Ceglie Messapica (5km), San Michele Salentino (3km) and the beaches of the Adriatic (15km).
BOOK NOW!